There is a student government meeting on Thursday after school in room 108. See Ms. Beckett if you cannot attend.

Any student that is attending the Skills USA district competition on Thursday must have paper work turned in by the end of school today! Please see Chef Maiden with any questions.

There will be an end of the season meeting for all Winter Track athletes on Thursday, March 2nd in the cafeteria at 2pm. Please make sure you hand in your uniform if you have not already turned it in. We will be discussing plans for the banquet and voting for next year's captains. Please see Coach DeLano if you cannot attend.

There will be a softball meeting on Wednesday, March 1st in room 115 immediately after school for anyone interested in playing softball this year. Any questions please see Coach Kulpa in room 104.


The Mock Trial will be competing in the state playoffs on Sunday, March 5th at Clark University for a chance at the sweet sixteen and elite trials. Best of luck to the team!


There will be a brief but important informational meeting for any girl wanting to play tennis in the spring on Tuesday, March 7th after school in the gymnasium. If you are unable to attend please see Mrs. Udell for information.

Attention to anyone interested in participation in boys' or girls' spring track. There will be an informational meeting on Tuesday, March 7th in the cafeteria immediately after school. If you have any questions you may see coach Moura in room 115 or coach Delano in room 125

Attention Students and Staff: Gather a group of friends and join the Class of 2018 for a fun-filled night of roller skating on Friday, March 10th! No matter your skill level, we invite you to join us at the newly renovated Forrest’s Family Fun Center in Taunton, MA. The cost of admission is $10 and includes rentals! Tickets may be purchased at lunch. Please see Ms. Burnham or Mrs. Hopkins with any questions.

The annual Blood Drive will be taking place next Friday, March 10th in the Small Gym. All students must have a signed parent waiver in order to donate. Waivers are in the main office or in room 108 and you can sign up for a time slot at all lunches. See Ms. Beckett with any questions.


All student government reps please be sure to check your assigned lunches for blood drive sign ups on Ms. Beckett's door on 108.

The Dighton Public Library is hosting a job search workshop on Thursday, March 23rd at 6:30 PM. Check out the job board in Guidance for more information.

A couple weeks ago, DRRHS received the honor of AP Honor Roll for another consecutive year. Below indicates that MA was the top state in the nation. Simply put, we are the best of the best! Go Falcons!

For the first time, Massachusetts is the top state in the nation in terms of the percentage of the class of 2016 that scored a 3 or higher on an Advanced Placement exam, the College Board announced this week. In addition, Massachusetts had the nation's highest five- and ten-year growth in the percentage of graduates who scored a 3 or higher. This accomplishment reflects both strong participation – approximately 44.1 percent of Massachusetts' class of 2016 took at least one AP exam while they were in high school – and frequent success, with 31 percent of the overall class scoring 3 or higher out of a possible 5 on an AP exam.

The Department would like to thank Mass Insight Education for their work to expand access to AP courses and congratulate all of the educators and students whose work made these impressive results possible!

Our DR Lady Falcons were sharping their claws yesterday while waiting to see their fate for an MIAA tournament seating,  by playing a scrimmage against Hockamock powerhouse Milford HS.
Coach Charette and Coach Saxon were fine tuning the teams play and are very excited to make it to the post season.
Best of luck to our Lady Falcons in the tournament.
Posted by Doug Kelley at 4:54 AM

Well the final game of the year was played by the Falcons Boys basketball team last night against Bishop Connolly HS. DR winning 69-51!
Elijah Brewster led the way with 29 points!
We would like to wish all our Seniors well and thank you for a great season.
Posted by Doug Kelley at 4:48 AM

DRRHS Multicultural Night!!! Save the Date! 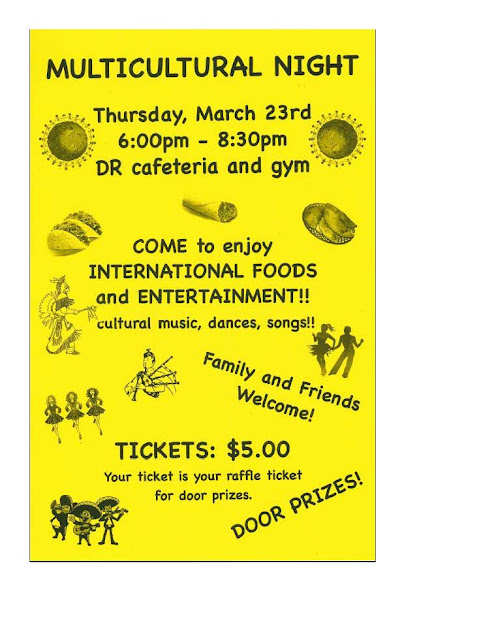 After learning how to properly describe, state, and use terms about medical emergencies, Señora Vander Kaaden’s Honors Spanish IV students demonstrated their new acquired knowledge through skits. Students worked either in pairs or in groups of three and created a skit in Spanish in which one student was the victim and the others were the medical professionals. In addition, the students utilized props, costumes, and other items to really bring their dramatic scenarios to life. Below are some photos of students while presenting their skits entirely in Spanish without the use of any lines or notes! Señora Vander Kaaden was very proud of her students and the effort they put forth! 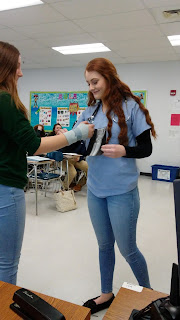 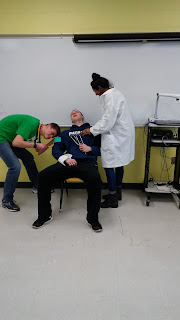 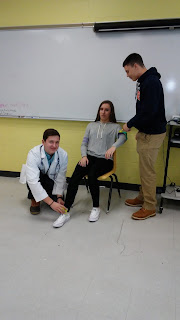 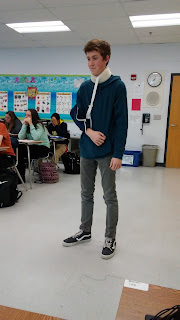 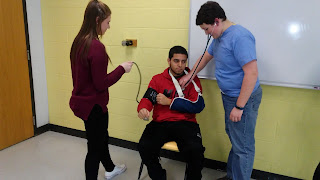 If you are applying for scholarships, please follow these instructions:

Pick up a "hot pink" scholarship form from Guidance - on the wall to the right as you walk in right before Mrs. Shillan's desk.

Fill out the form entirely, including parent signature, and submit to Mrs. Shillan along with all supporting materials needed for your application.

Please submit two weeks prior to the application deadline to ensure timely delivery.

We will mail your application and official transcript to the address you provide.

Please contact Mrs. Payne or Mrs. Donahue with any questions.

To see the scholarships available via our Guidance center, please go to our website:  www.drregional.org  Select the center tab for DRRHS.  On the left, select Guidance, then select Scholarships.  If its says, Application available in Guidance, then see Mrs. Shillan in guidance for a hard copy of the application.
Posted by Unknown at 2:39 PM

Please make sure you are signed up to take the SAT BIO Test on May 6th. You can visit www.collegeboard.com to sign up and pay for the exam. If you have any questions, please see your Guidance Counselor or your Biology teacher.
Posted by Unknown at 2:29 PM

This Week and the Week Ahead

This week our students worked hard to prepare to make up time missed last week during the snow days.  For students enrolled in Advanced Placement courses, ensure that you stay on track.  For many winter sports teams, there season has either come to an end, or they will be finishing up over winter break.  Thank you for all your efforts and representing the DRRHS colors of GREEN and GOLD with pride. #DRPride

Black History Month:
For this week’s segment on Black History month, we wanted to provide 10 famous inventions that were created by African-Americans that we may not realize. The information below comes from the following websites:

Mr. Cute Recognized for the Perfect Season:
On Tuesday, February 14th, Mr. Bill Cute was recognized by State Representative Steven S. Howitt and State Representative Patricia A. Haddad for his dedication to DR Students.  During the ceremony, Mr. Cute pledged to coach “another 10 years until I have coached 50 years!”  Many of the DR Golf Team was present in support of Coach Cute.  We appreciate Mr. Cute’s dedication to DR Excellence and are fortunate to have him part of our school community.

Student Handbook Update:
BUILDING SECURITY
On Tuesday, February 14th the School Committee approved the new handbook language below which explains the use of video cameras that were installed this year.  We appreciate everyone’s dedication to DR safety.

Dighton-Rehoboth has instituted several procedures designed to tighten building security, and to keep unauthorized persons out of the school building, and/or off school grounds.  The following measures have been put in-place:
● After all buses have arrived, all doors will be locked at 7:17 A. M.
● Any student who is tardy, must ring the buzzer located at the Rehoboth main entrance, identify themselves, and report to the principal’s office. Tardy students must also sign in, and secure a hall pass from the principal’s office. All other visitors must do the same (except securing a hall pass).  They do, however, need to sign in and secure a Visitor’s Pass, that must be worn at all times, while in the building or on school grounds.
● Any person suspecting that a stranger is in the building, without a proper Visitor’s Pass, is to notify the Principal’s and/or Superintendent’s office immediately.
● No one may open an outside door anywhere in the building, to ANYONE. The penalty for non-compliance of this rule is a one-day suspension.
● A video camera system has been placed throughout the facility, where there is no reasonable expectation of privacy, for further security. Students identified on security cameras, in violation of Student Handbook regulations, will be subject to disciplinary action.

Lifeguard Certification Course Offered in March:
D-R Falcons Swim Coach Bob Hassan will be running a lifeguard certification course in March for anyone 15 years of age or older. This is open for adults as well. This is excellent knowledge to have if you spend time around water should an emergency arise! If you are interested in participating, please email Coach Hassan at coachbobswim@gmail.com. The course will be taught at the East Providence Boys and Girls Club at 115 Williams Avenue in East Providence. Dates, times and cost details will follow.

On Thursday night 19 athletes who qualified for the D4 MIAA Championships traveled to Reggie Lewis Arena for what was essentially the last meet of the season. DR performed well in some important events. Kyle Rendon finished 5th overall in the 1 mile with a time of 4:33.16. Zach Lyne and Ben Biello competed in the 55 Hurdles and Dash respectively. The Boys 4x200 (Shawn Pereira, Reis Foley, Brian Ripley, and Dylan Souza (also a 6.95 in 55 dash) team placed 8th with a time of 1:37.08. For the girls, Kylie Fletcher placed 8th overall in Shot Put, hitting a distance of 33’ 11.5”. Also competing was the 4x400 team (3:40.58) of Dean Bullock, Joey Reed, Tyler Hall, and Dom Berthiaume (who also ran a 37.7 in the 300m). The 4x800 team of Andrew Sheedy, Adam Sheedy, Matt Grady, and Billy Davis with Liam Pontes as alternate (9:11.6) and Sophia Burrows also threw shot (28’ 2.5”).

The MIAA Winter 2017 Girls Central/South Swimming and Diving Sectionals were held last Saturday, February 11 at the MIT Zesinger Sports Complex in Cambridge.
After waiting on-line in the brutal 20 degree temps for over an hour, the DR Falcons Girls entrants ended their season in fine style and turned in their best times all year!
Congratulations to team members Kaitlyn O'Connor, Megan Alves, Madison Correia, Emma Wheeler and Caroline Enos for outstanding performances!
The Boys Sectionals were cancelled due to weather, however, Jeff Tran and Henry Ciannevei are competing in the MIAA State Championships this Sunday at Boston University. Owen Conti and Bryan Abbott are going to States with Jeff and Henry

Sign up to receive daily blog updates to your email!